I have blogged before about the only person in this world who I can call my best friend.  I had met her when I was about 3 years old, and since the time that I knew what a best friend means, she was the one.  We were inseparable.

I moved to a different city when I was 11. But we stayed in touch through handwritten letters and phone calls.  I stayed at her house whenever I visited our hometown. She visited at my uncle’s house where I stayed.

And then life happened. We were not in touch for some time.

Last year she moved to the same city as me and I was delighted at the thought of having her close by. Still, we were not able to meet for some reason or another.  One day, I had some work in the part of the city where she works.  The ‘work’ I had gone for was highly unsuccessful to the extent of being ridiculous.   I called her from there, and asked her if she would like to meet.  She was just getting out of work and she was also keen to me for dinner. I finally met her. After a decade. I blogged about it.

Our houses are 5-6 kms apart. When we took the cab back from the restaurant (long ride) we were trying to figure out which way we should take, and depending on that whose house will come first.  I wanted to drop her and she wanted to drop me. She refused to be dropped first and said in case we drop at her place first,  she and her husband would drive me to my place. Finally, after few permutations, combinations I got down first.  I told the cab driver to take her safely. When I reached home, my mother was concerned that she would be alone in the cab now.  I told my mother that either way, one of us had to be in the cab alone! We cannot BOTH keep dropping each other all night! But that is how our friendship is. As kids we fought with each other on who would get the bigger piece of samosa from the school canteen.  As adults we were fighting on who would drop who!

After this meeting, she invited me to her place couple of months ago.  Her husband, her mother  and her daughter were all there. I was going to her house for the first time.  I had some work that day, and I told her if I finish my work and come I will be late so I will just work for some time from her place. She of course agreed and said I can be comfortable there. And so I went to her place with my laptop. 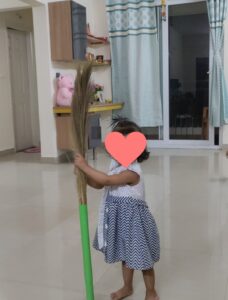 This little one welcome me by cleaning the already spotless house! After shying away from me initially she got excited towards the end and could not sleep afraid that an important moment with Mausi could get missed!

Dinner was served. There was egg noodles, chicken, fried rice.  Aunty remembered my love for noodles.  Aunty said I ate well as a child, but now I am fitness conscious and I don’t eat well. She said as a child I used to ask her for two fish pieces, and I used to tell her that I like fish more than chicken. There was nariyal barfi for sweets.  I am not a sweets person and the only sweet I like more is nariyal barfi  / laddu. Aunty remembered. She and Aunty remembered so many things. Even though we had not met in so long.

And then it just struck me.

For people who love us keep the little child in us alive in their memories.  They remind us that at some point in life, we were so carefree.

For people who love us keep our dreams alive in their memories. They remind us what we were passionate about.

For people who love us remind us who we were.  Before the labels.  Before life became unrecognizable. They remind us of who are at our core. They remind us that no matter what happens in life, we should not change as a person. Not just because we owe to ourselves.

But we owe it to those whose love stayed for us, even though so much inside and outside of us changed.